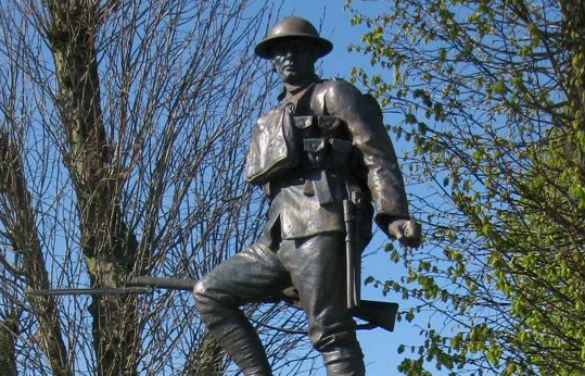 A century ago a Land Registry lawyer serving in the Royal Berkshire Regiment was wounded in an attack on a German trench during the Battle of the Somme.

Before the First World War, he was a captain in the 1/4 Battalion of the Berkshires, in charge of C Company formed of men from Windsor and Maidenhead. This was a territorial formation of volunteer reservists and when war was declared in August 1914 they had just started their two-week annual camp.

Like the other officers, he immediately volunteered for active service but it was not until 30 March 1915 that they left for France from Folkestone on the South Eastern Railway ship Onward. After a freezing night under canvas at Boulogne, they headed off to Romarin in that small part of Belgium the Germans had failed to capture in 1914.

They then settled down to a routine of four days in the front trenches and four days in the reserve. Captain Lewis’ company were based in trenches 37 and 38 near the edge of Ploegsteert Wood. When in reserve he would have slept in a log hut within the wood in two-tier bunks made of wire and filled with straw.

At this time, according to the writer of the battalion history, there was still much natural beauty in the wood. Things were very quiet and the opposing Germans did little to make their life uncomfortable, even forsaking the tempting target of sappers digging a new trench for days.

From Belgium to France

July 1915 saw the battalion move to Hebuterne near Arras in north-east France, to relieve the French there. There the trenches were deeper but they were plagued by lice, slugs and “gigantic rats, some of which were so bold as to gnaw through the men’s haversacks, as they slept, in search of the food contained therein”.

In winter things were worse. Torrential rain caused the sides to cave in and some of the men had to live in water and liquid mud which even got into their food. However, there were some baths and drying equipment in the next village and they tried to make sure no-one had to bear the worst of the conditions for more than two days in a row.

For a while it looked like the Battle of Loos in September 1915 might extend to their sector but this never happened. The well dug-in Germans taunted them by shouting “Come on Berks” across no-man’s land.

Christmas Day 1915 was spent away from the front. Captain Lewis and the other officers celebrated the day at a nearby chateau whose owner had offered a room for their party. The other ranks received a plum pudding each from the commanding officer and other gifts collected by the people of Berkshire.

Then came the Somme offensive which opened on 1 July 1916 and continued into the autumn. On 23 July Captain Lewis' battalion supported the Oxford regiment in taking German trenches at Pozieres under shell fire. Of the 650 who went into battle the battalion lost 30 dead and 233 injured.

The conduct of the officers and men was praised by the battalion commander and his superiors:

It will be a matter of great pride for all who know or are connected with the Battalion to hear of the gallant way in which the Company Officers led the attacks, and the able way in which they handled their various commands.

The Berkshires were relieved and withdrew to Bouzincourt for training to assimilate a number of raw recruits. But there was also time for leisure with entertainment from the cinema and divisional band. All clothing received a much needed disinfecting.

The interlude was all too short. On 14 August they were back in the front line and about to go ‘over the top’. The Oxfordshire Regiment had captured a German trench at Pozieres, but were having difficulty holding onto their gains. Captain Lewis’ C Company was ordered to advance to help them.

The whole attack was a fiasco. It was delayed so instead of occurring in the dark at 4.45am they were forced to advance in daylight half an hour later. Furthermore, the promised supporting barrage never materialised. The regimental history records:

Thus the three Companies went over most bravely, in face of almost certain failure. They had 250 yards of absolutely unfamiliar ground to cover. The rifle and machine-gun fire was intense, and terribly accurate. The Huns, having no shells directed at them, stood up in their trenches aiming deliberately at each man in the broken and thinning lines. Short rushes were made from shell-hole to shell-hole, each rush proving very costly in casualties. Few, if any, of the men got within 100 yards of the enemy. Captain Attride had been wounded in the body, and Captain Lewis in the thigh, and hardly an officer was left. It was evident that no bravery or determination on earth could turn failure into success. The men began, therefore, in accordance with orders to edge into a shallow communication trench only half finished…. It was a poor shelter, but offered a chance of safe return. Captain Lewis reached it with his orderly's help, and, though grievously wounded, was brought back.

The wound effectively ended Captain Lewis’ service but he was promoted to Major in August 1917. It required further hospital treatment in 1918 and the deformity of the left thigh left him able to walk only with difficulty and needing a special boot because of the shortening of the leg.

Major Lewis was deemed unfit for anything but sedentary work, so a job was found for him in the Ministry of Reconstruction. By 1922 he was back with Land Registry at our Lincoln's Inn Fields offices, where he would have daily seen the plaque recording the names of his 14 colleagues who died during or as a result of their wartime service. Cyril Lewis survived, but he bore the scars as one of the million casualties of the Somme.